Which square is darker when you look at the picture below? Square A or square B? 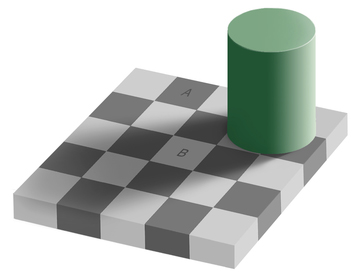 Quite surprisingly, the correct answer is that squares A and B are the exact same shade of colour. Your brain however perceives them differently, due to the surrounding colour and shadow details. More incredibly, is the fact that your brain continues to perceive square A as much darker than square B, even after learning that the two squares are the same colour. The illustrated proof below helps provide your brain the evidence for what your eyes simply are not able to see: 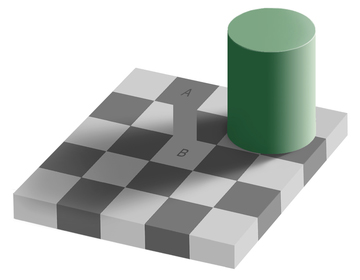 So just why is it that we can’t perceive the colour shades the way they actually are, even after being given proof that they’re both identical? This has largely to do with our brains ability to interpret a 2 dimensional drawing as a 3 dimensional representation.

We naturally perceive and compensate for shadows in real life, and so it is with the cylinder that we expect for it to cast a shadow on the checkerboard squares adjacent to it. The image however has been manipulated by its creator so that the shadows and the colours give the illusion of shadow – without a realistically rendered or predictable shadow being present.

Moreover, since we interpret the patterns of a checkerboard in a pre-determined way, so alternating bright and dark squares laid out in a grid-like position, our brains instinctually assign square A to the darker colours and square B to the brighter ones, irrespective of their actual colour.

Another variation on Adelson’s illusion is shown here: 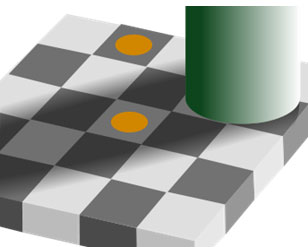 As you’ll note, the lower circle appears to be bright orange, while the upper one appears darker with a somewhat brownish tone. Just like the grey checkerboard squares, they are of course totally identical in colour!