Perhaps the most important goal of BrainHQ training is to speed up your brain’s processing. That’s 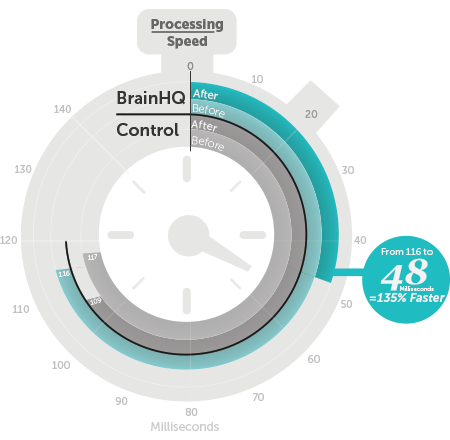 because quick, accurate processing of information that comes in through hearing, vision, and the other senses affects “higher” cognitive functions—like memory and problem solving. When the brain can’t quite keep up with the speed at which information is coming in, it makes only partial, “fuzzy” representations of that information. This has short-term and long-term effects. In the short term, it might lead you to mishear what someone said, have trouble following a conversation in a crowded place, miss a key visual detail (like a pedestrian entering the crosswalk), or misinterpret a brief facial expression. In the long term, it affects memory: your brain only has a fuzzy recording to rely on.

designed to gradually speed up visual and auditory processing. So far, 25 papers have shown that they work.

In general, these studies were conducted in cognitively healthy adults aged 65 and older, and in some cases, aged 50 and older. Remember that studies show average results, and that individual results will vary. Where published studies make reference to clinical populations, it is for informational purposes only. BrainHQ is not intended to diagnose or treat any clinical condition.

Speed of processing training in the ACTIVE study: How much is needed and who benefits?
Ball et al. (2014)
Journal of Aging and Health
View article

Transfer of a speed of processing intervention to near and far cognitive functions
Edwards et al. (2002)
Gerontology
View article

An examination of mediators of the transfer of cognitive speed of processing training to everyday functional performance
Edwards et al. (2013)
Psychology and Aging
View article

The neural correlates of an expanded functional field of view
Scalf et al. (2007)
Journals of Gerontology, Series B
View article