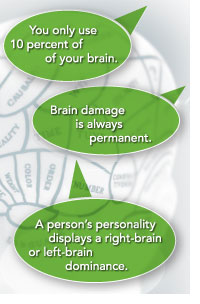 What is common among the three statements to the left?
They are all myths and are believed to be true by most people. Some brain myths derive from partial truths while other myths have been born out of misinterpretations or because of someone needed a great sound bite. Regardless of their origin, these myths continue to be passed around as fact by people around the world.

The myths that are spread virally and treated as fact are usually those that appear to be backed by science. This is mostly because people are less likely to question the legitimacy of these myths because of the apparent “scientific sponsorship”. Since much of the brain and its functions are not fully understood, brain myths have a tendency to be even more challenging to demystify. Recent research has been able to discredit several brain myths as a result of what scientists have discovered about the brain.

Myth No. 1: Only 10% of your brain is actually used.
The Fact is: You use your entire brain
While its origins are uncertain, the myth that we only use ten percent of our brain has been shared as truth for a very long time. The factuality of this myth has been reinforced by misinterpretations and unsupported quotes from scientists, researchers, and laypeople over the past half century.

In actuality we use nearly our entire brain every day.

To illustrate brain use, imagine you are reading a book while eating a granola bar. While you are reading the words on each page your frontal lobes in the cerebral cortex are busy performing reasoning and thinking functions. At the same time, your parietal lobes are allowing you to enjoy your granola bar because these lobes are responsible for things like taste, texture detection, and smell. Meanwhile you’re able to process how you see the words in your book thanks to your occipital lobes and you are able to process the sounds that you hear, such as the rustling of the pages, because of your temporal lobes.

At the same time your brain is handling all of these functions and actions, your motor area is making you blink, you are holding your granola bar because of your cerebellum. You are also maintaining your posture, breathing, digesting, and circulating blood around your body all as a result of your brainstem. Your pituitary gland is simultaneously controlling your water and sugar levels, metabolism and hormonal functions. Furthermore, if you happen to be outdoors on a chilly day, your hypothalamus is accountable for your shivering in the colder weather.

Myth No 2: Your personality displays whether you are right or left brained
The Fact is: The two sides of your brain depend on each other.
The myth that right-brain individuals are more creative or artsy and left-brain individuals are more logical and linear originated from legitimate science. While this was previously a scientific believe, new imaging technology has led to a discovery that the two sides of the brain are actually more interdependent than previously assumed.

Myth No 3: Brain damage is always permanent.
The Fact is: Our brain can repair itself or compensate for certain lost abilities; it can even generate new cells and neural pathways.
Previously it was believed that we were all born with a specific number of brain cells and damaging any of them or being born with fewer brain cells meant that your number of cells would be depleted forever. Until recent research discoveries, prominent neuroscientists believed this to be true and even believed that the brain could not be repaired once it was “broken”.