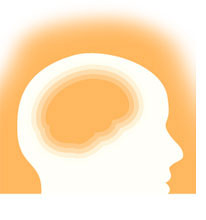 "One day, I put my sneakers in the freezer, blanked out on my sister's birthday, and received a call from my son's school because I'd forgotten to pick him up," 35 year-old Suzanne recalls of her memory lapses during breast cancer chemotherapy treatment.

A 67 year old retired pharmaceutical representative and breast cancer survivor, Laverne, was concerned that her chemotherapy treatments may have been causing her recent memory fogginess rather than being caused by the aging process. "I read that one of the side effects of the chemotherapy was memory loss, but the truth is I had senior moments before, during and after chemo. I can't definitively say that I noticed a difference," she laughs.

Both Suzanne and Laverne were sharing their experiences with chemobrain and chemofog.

Chemobrain, as described by the Mayo Clinic, "refers to cognitive changes during and after chemotherapy." Approximately 20-30% of breast cancer patients who undergo chemotherapy experience the effects of chemobrain including memory loss, inability to find words, and a weakened ability to learn new things and multi-task.

There are many different opinions and views on chemobrain. Medical professionals are divided on the subject in similar ways as Suzanne and Laverne. Chemobrain is regarded by some as a real phenomenon related to chemotherapy and they back up their claims with several studies that have documented cases showing a clear correlation between chemobrain and chemotherapy.

Contrary to beliefs that chemotherapy is the direct cause of chemobrain, other medical professionals suggest that the effects are more likely caused by the added stress of chemotherapy coupled with many other factors. In this scenario, chemotherapy is essentially just one factor of many that as a whole can impact a patient’s cognitive functions. There are many factors such as lack of sleep and increased anxiety that can cause a decline in brain functions when chemotherapy is added to the mix.

Some studies have also stated that chemobrain may not be associated with chemotherapy at all. There are some medical professionals who have reported that the effects of chemobrain are more likely to be caused by factors that haven’t been investigated as of yet and they encourage further research into other factors to try and determine what is causing chemobrain. A recent study was printed in the journal Cancer (2004), showing the results of a cognitive evaluation of 84 women with cancer before they began their chemotherapy treatment. The results of the study indicated that among other things, 35% of the women "exhibited cognitive impairment" and that "memory function (25%) [was] impaired more frequently relative to normative expectations" even prior to chemotherapy treatment. According to the study’s conclusions, in order to determine the actual cause of chemobrain, post-chemotherapy studies should include pre-chemotherapy evaluations to get a more holistic understanding of the problem.

According to brain scans performed by researchers at UCLA, the brains of breast cancer survivors who received chemotherapy treatment had to work harder to perform the same tasks as individuals who received surgical treatments.

To this day the debate continues and further research is still being performed on the subject. Regardless of the direct causes, there are similarities between chemobrain and normal age-related declines in cognitive functions which are recognized by the genesis of chemobrain, Dr. Henry Mahncke, Vice President of Research and Outcomes for Posit Science. In both cases, the effects have a direct impact on an individual’s quality of life and Dr. Henry Mahncke reports that Posit Science is currently developing a clinical trial to evaluate the benefits of using the company's Brain Fitness Program to improve the quality of life for breast cancer survivors undergoing chemotherapy.

"As a corporation, we look forward to determining the impact of our cognitive fitness program, and hope to provide benefit to the approximately 50,000 women with breast cancer undergoing chemotherapy each year."

To learn more, visit this link on chemobrain.