Your Brain in Love 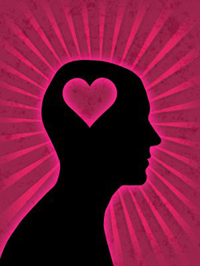 You’ve likely heard that the most important organ for love isn’t actually the heart but rather it’s the brain. Recent neuroscience on love has revealed some very interesting discoveries on the brain that may surprise you and even demystify some things you thought were true!

Why lovers talk all night or walk till dawn

Have you ever experienced falling madly in love with someone? During her academic career, a researcher named Helen Fisher has attempted to determine what is happening in the brains of those who have fallen madly in love. By scanning brains in her research, Fisher discovered that many areas of the brain start to light up when an individual is focused on the person that they passionately love.

During her research, Dr. Fisher was surprised to find that part of the primitive reptilian brain, called the caudate nucleus, became very active during testing. She also discovered that one of the other important areas of the brain lit up although this was expected because this was the area of the brain related to dopamine and norepinephrine chemical production which are associated with excitement and pleasure.

Fisher puts it best when she says, "No wonder lovers talk all night or walk till dawn, write extravagant poetry and self-revealing e-mails, cross continents or oceans to hug for just a weekend, change jobs or lifestyles, even die for one another. Drenched in chemicals that bestow focus, stamina and vigor, and driven by the motivating engine of the brain, lovers succumb to a Herculean courting urge."

Dr. Fisher also supports the hypothesis that being madly in love is addictive in similar ways to eating chocolate and during the passionate phases of love is closely linked with other parts of the reward system. The same chemical production, dopamine, that lit up during tests is the same chemical that is released when drugs such as cocaine are consumed too therefore it is not a surprise that many researchers suggest that a bad break up is like kicking a drug habit as far as the brain is concerned.

Taking a look at another aspect of love is Ted Huston who has spent much of his life studying long-term relationships. One of his interesting discoveries was that there was a correlation between couples who idealize each other and happier marriages. According to Huston, "Usually, this is a matter of one person putting good spin on the partner, seeing the partner as more responsive than he or she really is." This illustrates another great benefit of “positive thinking”.

Another interesting discovery that Huston found was that happiness in a marriage was impacted by various gender differences. According to some of Huston’s studies, men who were happy with their financial situation had a tendency to be happier in their marriages while women who were able to spend a lot of time with their spouse and friends tended to be happier in their marriages.

Some couples never leave the “honeymoon phase” and act like lovebirds for decades. The brain scans of these individuals resemble those from Helen Fisher’s study participants on couples that had just fallen in love. In these scans, the activity that lights up in the brain is from regions that are related to motivation, cravings, and reward. Researcher Arthur Aron and colleagues note that "…while romantic love is a mystery, and maintaining it may never be fully understood, the study provides evidence and possibly clues to what may be essential activity in the brain for love to last."

Did you know that you can keep your relationship healthy and happy with regular date nights? Most happy couples understand this very important method of keeping the romance alive. Recent neuroscience research supports this assertion but only if you do it the right way.

So what’s the secret? The important thing to take note of is making date nights fresh and innovative. When you and your partner engage in date nights that are fun, exciting and new, your brain is rewarded with a flow of dopamine and norepinephrine in similar ways to when you first fell in love as noted with Helen Fisher’s research. One of the key factors in driving brain plasticity is novelty, according to the research of Dr. Michael Merzenich.

When it comes to couples spending time together and happier relationships, research from psychologist Richard Slatcher shows that couples who spend time with other couples are “more likely to have happy and satisfying romantic relationships.” In similar ways to the novelty benefits from regular date nights, couples who spend time with other couples appear to be experiencing the same benefits from novelty that comes from other sources. Therefore you may want to book a date night for four from time to time.

When it comes to bonding, studies of both humans and animals have found that oxytocin plays a central role in forging relationships. In particular forms of contact with other people, oxytocin is released in your brain creating a bond between you and the other individual involved. Oxytocin’s role in this bonding process makes a lot of sense considering that research shows that the chemical is released during nursing of a child, sexual activities, during the act of hugging and is also believed to play a role in other emotional responses such as empathy and trust-building. Early research suggested that individuals suffering from disorders such as autism or schizophrenia may benefit from oxytocin treatments because of its ability to help create bonds between individuals.

While oxytocin has been shown to play an integral role in the creation and solidification of bonds, recent studies have suggested that it may also encourage less desirable behaviours such as jealousy, envy, and suspicion. Overall it appears that oxytocin actually strengthens and activates a variety of social feelings and not just the positive ones. In the words of researcher Simone Shamay-Tsoory of the University of Haifa, "…when the person's association is positive, oxytocin bolsters pro-social behaviors; when the association is negative, the hormone increases negative sentiments".  According to psychologist Greg Norman, this shows that "oxytocin is not a love hormone; its effects vary in different people."

According to recent research, listening to music can render similar effects on your brain as pleasurable activities. Regardless of your musical preference from R&B to Rock and Roll, your brain releases dopamine when you’re excited and this can produce comparable effects to having sex or other satisfying activities. This is supported by recent MRI and PET scans which have revealed that if you have no room for romance in your life than you can generate similar pleasurable experiences while listening to your favourite songs.

Like everything in life, moderation is the key. It is possible that an individual’s responses to dopamine are diminished over time as a result of over-producing dopamine. Essentially this means that it’s possible to lose your ability to experience pleasure of any kind. Not to worry as this is usually only caused through the use of illicit drugs like heroin or cocaine. While this may not affect the majority of us, you may still be at risk if you love fatty foods because dopamine is released when you consume fatty foods and overdoing it may lessen your ability to experience pleasure from these foods – not to mention the impact these foods have on your pant size!

BrainHQ exercises have been designed and developed by leading scientists to speed up and sharpen the brain. The exercises are clinically proven by independent researchers to help people think faster, focus better, and remember more. The benefits from improving your brain will help you be your best for whatever matters most to you. Start training your brain to be the best “you” possible; whether at work, with friends, with family and in life!