Published Research on BrainHQ and Memory 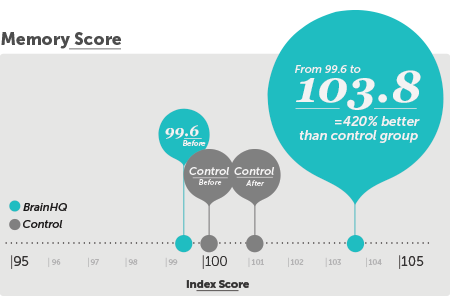 Of all cognitive abilities, memory is one that feels particularly important to many of us. Having a sharp, effective memory makes people more confident—having memory lapses can leave them feeling insecure.

To date, fifteen scientific papers—conducted by well-regarded researchers at

respected universities in a variety of populations—have shown that using BrainHQ exercises can have a substantial impact on memory performance. Here are some highlights:

Information and citations for memory-related articles

In general, these studies were conducted in cognitively healthy adults aged 65 and older, and in some cases, aged 50 and older. Remember that studies show average results, and that individual results will vary. Where published studies make reference to clinical populations, it is for informational purposes only. BrainHQ is not intended to diagnose or treat any clinical condition.

Evaluating the relationship between change in performance on training tasks and on untrained outcomes
Zelinski et al. (2014)
Frontiers in Human Neuroscience
View article