A critical aspect of focus and attention is alertness. Success with things like memory, problem solving, learning, and higher-order reasoning is driven by our level of alertness. According to studies, one of the qualities that may separate average and above-average achievers from underachievers is a person’s state of alertness.

We may describe ourselves as feeling “in the zone” when we are at the right level of alertness. Being in the zone allows us to perform optimally, shift focus, be productive and multitask. The reason why training your brain to get alertness “in the zone” is so important is the relationship between these other more complex brain operations and alertness.

Two types of alertness have been identified by scientists: phasic alertness and tonic alertness. Your attentional state is determined by these two alertness measures working in concert with each other.

Your overall level of alertness is called tonic alertness, which is critically involved in maintaining your focus on something. In order for higher-order cognition to occur you need the “tone” provided by tonic alertness.

Both your phasic and tonic alertness are targeted in our Freeze Frame  exercise. Over increasingly longer delay periods your brain is required to maintain a relaxed and ready state of alertness. Throughout the Freeze Frame exercise your brain is required to differentiate between target images and images that are designed to be distractors. During the exercise, you’ll press the response key whenever you see a distractor – an object that is not the target. Whenever you see a target, you need to prevent yourself from hitting the response key – in other words “freeze”! 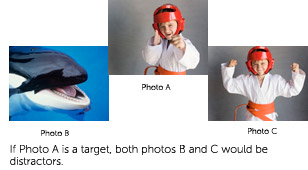 Although this exercise may sound easy on the surface, the longer the delay between targets the more likely you’ll be tripped up by internal distractions or a wandering mind.

As you move through the levels of the exercise you’ll experience the following: