Be Social for a Better Brain Fitness 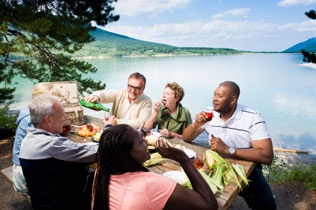 Neuroscientists have recently realized just how true John Donne’s famous quote, “No man is an island” is as we need to engage and remain connected with others as part of our social health and brain fitness.

According to numerous studies, your brain fitness is positively impacted by frequent social interactions and upholding meaningful relationships. So by adding socializing to your routine mix of physical fitness, healthy eating, and brain training, you are sure to improve your brain sharpness.

Researchers have witnessed the impacts of relationships and mental health issues for the past few decades and have found correlations suggesting that social interaction levels can impact mental health issues such as chronic depression. Some of these studies have even determined that severe physical and psychological effects are seen in children who have lower social support and inadequate social interaction. Additionally, the negative impacts of this social deprivation can be seen late into the individual’s adulthood. As demonstrated by these research, it is important to maintain rich, social relationships in order to help prevent mental disease.

In addition to helping prevent mental conditions, some research suggests that socializing can improve your memory and ability to think more clearly. One such study by Oscar Ybarra of Michigan University found that there was a direct link between social interaction and improvements in brain functions performance. The study monitored 3600 people’s phone usage to analyze the length of each call as well as the relationship of the person on the other end.

As Ybarra notes, "The size of the brain has been correlated with the size of the social groups the animals typically form." in both primates and other mammals. The current belief is that human brains have evolved over time to their present size in order to allow us to solve social problems that arose from the groups that we formed. Therefore it stands to reason that increasing your social engagement can yield positive benefits for your brain.

While it could be presumed that this is just coincidental and that individuals with healthy brains tend to socialize more however some additional studies have explored this correlation further and found some very interesting results that support this belief.

The study assigned participants into the following three groups:

Once the participants completed all of their activities, they were each tested to measure their brain performance. The study determined that the participants who spent the most time socializing and engaging with others had the highest scores.

Now that we understand the benefits that social engagement has on our cognitive performance, it is heart-breaking to know that many Canadians lack sufficient social interaction when they need it most, later in life. Unfortunately we live in a society where we tend to segregate ourselves and the size of our social circle is reduced – either by choice such as retirement or through other factors such as the passing of loved ones. While this may be a possibility for many of us, it can be prevented by increasing your social interaction through various efforts such as volunteering, joining new clubs, and connecting with long lost friends or colleagues.

It’s important to be social and interact with others in your community. Remember your body and your brain will be very thankful!