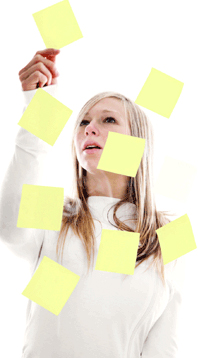 Memory lapses can be experienced by people of all ages and can be both an inconvenience and embarrassing. Who among us hasn’t forgotten exactly where they parked their car at the mall? However, many begin to worry that the slip-ups are precursors to Alzheimer’s Disease (AD) when older people are forgetful.

Even though Alzheimer’s is a real concern, we shouldn’t be afraid that every memory slip is a sign of AD. All adults experience memory loss and it’s only in some cases where the loss signals a serious condition. Definitions for the common causes of memory loss in maturity are listed below:

Cognitive Changes in Normal Aging
The ability for us to remember details about our experiences, to identify the source of what we’ve learned, and to manipulate a number of bits of information at the same time have all been confirmed in studies to decline as we grow older. Although this process accelerates and becomes more noticeable after the age of 50, the process actually begins as early as mid-20. These cognitive changes are a part of normal aging event though they can be frustrating - limiting your interests and activities.

Prevention or reversal of normal “cognitive decline” has been demonstrated in recent research by keeping your mind engaged in new and challenging activities.

Mild Cognitive Impairment (MCI)
A more serious kind of memory decline is described by the term ‘mild cognitive impairment’ (MCI). People with MCI, similar to those aging normally, may complain that their memory just isn’t what it used to be. Their loved ones might even agree. However, in addition to the general complaints related to cognitive changes, people experiencing MCI perform worse on certain memory tests as compared to others in their same age group. People with MCI do not show impaired judgment which can be expected with Alzheimer’s disease or other forms of dementia.

MCI can, for some people, represent a period of transition between the more manageable and mild memory problems we associate with the normal aging process, and Alzheimer’s more debilitating symptoms. The number of individuals with a specific type of memory-related MCI that go on to develop AD each year varies, but a number of studies suggest approximately 10%. You can visit the Mayo Clinic for more information about MCI.

Alzheimer's Disease
The most common type of dementia is Alzheimer’s. The estimated number of Canadians living with AD in 2007 was 300,000. The number of Americans afflicted with the disease is currently estimated to be 4.5 million. As the Baby Boomers age and more people live into their 80s & 90s, the number of afflicted is expected to triple by 2050 unless effective therapies or cures are found. The reason is that older people are much more likely to get Alzheimer’s. In fact, 10% of people over the age of 65 have Alzheimer’s while more than 47% of people over the age of 85 do.

Although Scientists have not been able to explain what actually causes AD they have identified the characteristics of brains afflicted with AD:

Alzheimer’s Disease has, for practical purposes, been divided into 3 stages: mild, moderate, and severe. Each stage corresponds to both behavioural and physical changes. The cognitive symptoms that became more noticeable in the mild stage of AD dramatically increase in the moderate stage. The moderate stage can become extremely challenging for caregivers to manage as it is characterized by both personality and emotional changes. Physical problems ultimately dominate the final stage of AD where patients are unable to walk or speak and may become incontinent.

Check out the Alzheimer Society Canada to learn more about Alzheimer’s disease.

Other forms of dementia
Alzheimer’s Disease is certainly the most common form of age-related dementia however there are others. A number of conditions resulting in severe cognitive deterioration are captured under the general term of ‘dementia’. Other common dementing conditions, in addition to AD, include:

Approximately 10% of all suspected dementias are reversible. Some of the causes of reversible dementia include: depression, hypothyroidism, drug toxicity, Vitamin B12 deficiency, and benign brain tumour.