In our Fine Tuning exercise, you’ll be asked to decide between “confusable pairs” – syllables that sound similar, such as do and bo.

This exercise may not be as simple as it appears because it actually includes sounds that are particularly difficult for our brains to distinguish, especially in situations similar to the following: 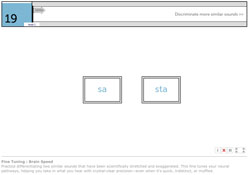 After the age of 30, or with specific cognitive-based problems, many of us experience a decrease in our ability to distinguish confusable pairs of syllables apart as our brains slow down – even if just a little bit. Every millisecond counts in order to accurately hear but even a fractional decrease in brain speed can result in sounds being muddied together. When words become muddied you might find yourself asking people to repeat themselves for clarity. And, of course, it can be more difficult to recall a sound clearly later if it isn’t recorded clearly in the first place.

When a word is received by the inner ear – for example the word bed – specific neurons specialized to the frequencies for each of the different sounds in the word (/b/, /e/, /d/) must fire precisely in sequence when the sound waves arrive in the ear. By firing neurons upon arrival of the sound waves the brain can clearly distinguish each individual sound. However, a “noisy” or fuzzy representation of the sound may occur if the neurons fire late for a certain sound causing the brain to miss part of that sound or perceive it to be a part of the next sound. As an example, if the neurons for the /b/ sound in bed were to turn on and off a bit too slowly then they would record a portion of the /b/ sound mixed with the /e/ - instead of a high fidelity, clearly distinct /b/ sound.

Because our brain is so adept at effortlessly replacing accurate hearing with context, we sometimes don’t even realize when we are beginning to experience this problem. In other words, because various words and sounds might provide an indication of what we should have heard we don’t always need every individual sound to be heard perfectly.

The objective of our Fine Tuning exercise is to retrain your neurons to perform their role more effectively. The goal is to have your neurons clearly distinguish, transmit, and represent each consonant sound, when used in conjunction with a vowel sound, by turning on and off at the most appropriate times. 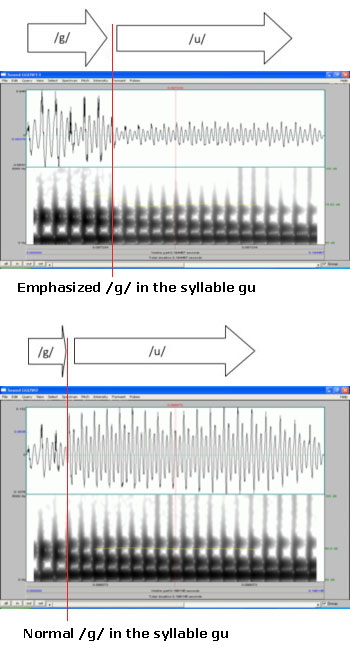 Wondering why the syllables sound unusual?
We have chosen to use synthesized speech for the syllables rather than natural speech in order to give our scientists full control over the sounds you will hear throughout the Fine Tuning exercise. To give your neurons (in the cochlea and auditory cortex) the time they require to accurately distinguish, transmit and represent the more difficult to differentiate consonant sounds (such as /b/ and /d/) these sounds are drawn out. The consonant sounds will progressively speed up as you improve at the tasks, which will ultimately push your neurons to speed up as well.

Over time those people who seem to mumble or ramble will become easier to understand as your brain gradually improves its timing and refines neural pathways. Every sound in a sentence will be clearly interpreted by your brain and you’ll no longer need to rely solely on understanding context in order to hear what is being said.