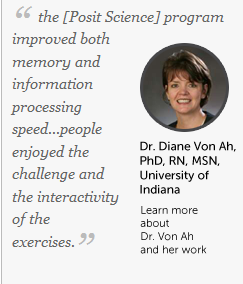 You may be surprised to find out that brain "fogginess" and declines in brain functions such as memory, thinking, and focus are reported by nearly 75% of cancer survivors who receive chemotherapy treatments.

These symptoms reported by cancer survivors are called "chemobrain" and the affects have been reported to last from a few weeks to several years. On a positive note, an independent and peer-reviewed study suggests that these deficits can be significantly reduced with our visual brain training exercises which are part of the BrainHQ program. The results of the study showed tremendous cognitive improvements in the test subjects ranging from enhancements in memory, brain speed, anxiety, depression and an overall improvement in health-related quality of life. You can learn more about the study and the significant improvements by reading the press release here.

While the results from the study are really impressive, this is not the first time that studies have shown that the symptoms from chemobrain can be improved with brain training exercises that are developed by Posit Science. In fact, a pilot study that was conducted indicated that our exercises improved processing speed, lowered stress levels, and improved quality of life in breast cancer survivors.

Background of Chemobrain
While scientists are divided on the precise cause of chemobrain, it has been believed for many years that the cognitive deficits reported by cancer survivors is linked to chemotherapy treatments. Even though the root cause of chemobrain may not be 100% clear, what is clear is that the chemotherapy treatments are playing a role in the brain "fogginess" that cancer survivors are reporting.

We recommend reading the article, What is Chemobrain, if you are interested in learning more about chemobrain research and statistics.

The Story of Cindy's Chemobrain
A 52 year old chemotherapy patient named Cindy Ryan experienced a decline in brain performance after receiving treatment for breast cancer. Cindy was experiencing chemobrain and believed there was little that could be done to reverse the brain "fogginess" that she was experiencing. Only after training her brain with Posit Science exercises, she felt the fog has lifted – Cindy was back in the cockpit as a search-and-rescue pilot!