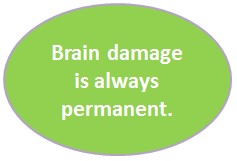 The Fact is: Our brain can repair itself or compensate for certain lost abilities; it can even generate new cells and neural pathways.

Previously it was believed that we were all born with a specific number of brain cells and damaging any of them or being born with fewer brain cells meant that your number of cells would be depleted forever. Until recent research discoveries, prominent neuroscientists believed this to be true and even believed that the brain could not be repaired once it was “broken”.