BrainHQ and Mobility Issues
We may think of falls and other mobility issues as physical problems, but issues related to balance have a lot to do with how the brain operates. Balance calls upon multiple cognitive and sensory systems: the vestibular system of your inner ear, your visual-spatial system and your visual-motor system. Most recurring issues with falls are more likely due to failures in these systems than something that went wrong with your legs.

A second brain system critical to balance, the visual-motor system, also tends to degrade with age. In this area as well, BrainHQ training can improve cognitive abilities (e.g., visual attention, speed, and executive function) that are critical to the millisecond and millimeter adjustments constantly being made in directing the body.

Studies on Exercises in BrainHQ
There are five peer-reviewed randomized controlled trials (RCTs) to date on fall risk and mobility using our exercises and assessments. Those five RCTs are reviewed and summarized below, starting with a pair of recent studies independently conducted in the Chicago Area by researchers from several universities and, then, followed by a review of three earlier foundational studies.

Adults Living Independently
Researchers at the University of Illinois and Northwestern University ran a study with 45 adults aged 65+ (mean age 72), all of whom lived independently and were cognitively intact. The sample was 100% African-American and 91% female. On average, participants were slightly above the clinically defined level of “significant fall risk” at the beginning of the study. The intervention group trained with visual exercises found in BrainHQ (called Double Decision, Visual Sweeps and Target Tracker in BrainHQ) for 20 hours, over a 10-week period (2x per week for 60minutes per session). Researchers found the intervention group made significant gains in balance and gait speed. The control group experienced declines in both measures over the same period.

Retirement Community Study
Researchers at University of Illinois, George Mason, and Texas A&M, ran a study with 51 adults aged 70+ (mean age 82). Participants were residents of six different independent living facilities in the Chicago area. The sample was 94% White and 77% female. On average, participants were slightly above “high risk” for falls as defined by the Centers for Disease Control at the beginning of the study. The intervention group trained with visual exercises found in BrainHQ for 30 hours, (over a 10 week period, at 3x per week and 60 minutes per session). Researchers found a statistically significant and large difference between the intervention group and the control group in a standard balance measure (Timed Up and Go), with the control group degrading over the period into the high risk category and the intervention group showing substantially less further impairment, not advancing to high risk by the end of the study. Researchers also found that among a subset of the more impaired participants (“slow walkers”) there was a significant difference between the intervention and control groups in the standard mobility measure of distracted gait, with the performance of the intervention group improving and the control group degrading. 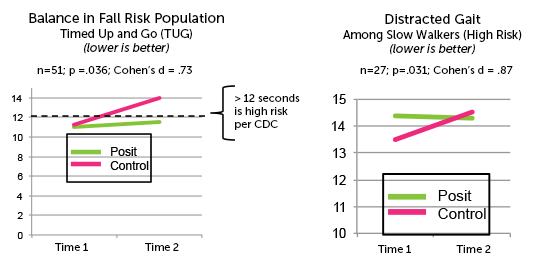 This study made use of visual exercises which can be found in BrainHQ under the following exercise names: Double Decision, Visual Sweeps and Target Tracker.

Three prior studies provide the foundation for this pair of studies, by showing that the Useful Field of View (UFOV®) Assessment predicts mobility risks. The inventors of the UFOV Assessment also created the patented UFOV training, which is now the Double Decision exercise in BrainHQ. Double Decision training has been shown to improve useful field of view and other cognitive skills. 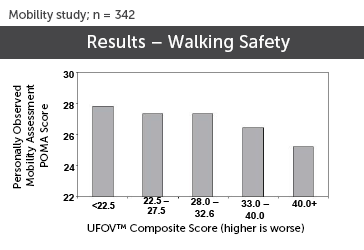 Citations for the five studies: