Imagine you are at the bookstore and trying to find a particular book in the stacks, but you can’t seem to locate the one you want out of the hundreds of others on the shelf. Or, picture yourself on stage giving a performance. You know your best 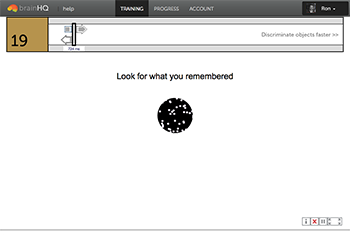 friend is in the audience, and would really like to find her face to give you a boost of confidence. But you can’t pick her face out of the sea of faces.

When we think about paying attention, we usually think about the things upon which we are actively focused. But an equally important part of attention is ignoring all of the possible distractions that are simultaneously occurring around us. Ignoring distractions becomes more of a problem as we age, but Mind’s Eye may be able to help with that.

In Mind’s Eye, you are asked to remember a target image and determine whether a set of similar images presented contain the target image. The exercise focuses on flows and patterns. It changes in the following ways:

This variation serves to engage the highest possible number of brain cells as you practice and improve.