More than 100 peer-reviewed science and medical journal articles demonstrate the benefits of BrainHQ brain fitness technology. Currently, 60+ of these articles address benefits to healthy aging adults, while 40+ articles address the impact on patients with health conditions (eg, depression, MCI, stroke, brain injury, chemobrain, schizophrenia). This report summarizes improvements to people across a wide spectrum, with a particular focus on what has been shown in research on clinical conditions. Citations appear in brackets, below, and tie to the journal articles listed at the end.

This report builds on a prior report on the impact of BrainHQ exercises and assessments on normal aging, which can be found in the healthy aging section. That prior report showed that BrainHQ assessments and exercises measure and improve basic cognitive function, and that training with the exercises generalizes to improve key standard measures of cognitive function (including, speed and accuracy of processing, attention, memory, executive function and every day cognition), as well as various standard measures of quality of life (including functional independence, mood and control, health outcomes and mobility). The impact of the BrainHQ brain exercises on healthy adults appears to be as broad and far-reaching as the impact of physical exercise, except the effects (i) require less time, (ii) diminish more slowly and (iii) impact the cognitive realm more deeply.

Researchers have now extended the findings of generalized improvements in standard measures of cognitive function and quality of life from healthy adults to people grappling with clinical conditions that include cognitive deficits. For simplicity, this report groups clinical conditions into three areas: mental illness, brain injury and neurodegenerative disorders. To some extent, these are artificial groupings that are both too broad and too narrow -- since each individual cognitive disorder within these groups has its own particular set of symptoms and since many individual symptoms are commonly found across disorders in all of these groups.

Put another way, it is worth noting that while people may find they have cognitive deficits from very different causes (eg, advanced aging, chronic schizophrenia, head injury), the symptoms are not all that different, and many of the same tools and strategies can be employed to address them. BrainHQ from BrainHQ is an online resource with dozens of cloud-based exercises designed to provide a broad array of tools to address many different cognitive deficits.

Except as otherwise noted, all studies cited in this report were (i) of BrainHQ assessments and exercises, (ii) examined in blinded, randomized controlled trials, (iii) had results that were statistically significant, (iv) have been published in peer-reviewed journals, and (v) were conducted by independent researchers.

This report is not recommending BrainHQ exercises for treatment of any disease or disorder; rather, it is reporting on the current state of the science in these areas for the education of healthcare and other professionals interested in developments in these areas.

Mental Illness
Schizophrenia. There are now numerous studies and reviews examining the impact of BrainHQ exercises 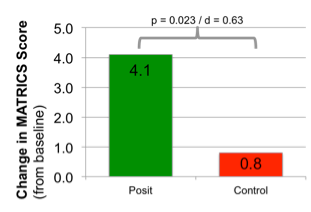 in people with schizophrenia. [citations 1,2,3,4,5,6,7,8,9,10,11,12,13, 14,15,16,17,18,19] Schizophrenia is often described in terms of its “positive” and “negative” symptoms. Positive symptoms, such as delusions, are often effectively treated with anti-psychotic pharmaceuticals. Negative symptoms, which typically include deficits in basic cognitive functions, are largely untreated, and are often what make it difficult for a person with schizophrenia to hold a job and live independently. Government and big pharma have agreed on a battery of cognitive measures, called the MATRICS Battery, to be used in examining the effectiveness of cognitive-enhancing drugs designed to treat schizophrenia. To date, no study has shown any drug yields significant gains on the MATRICS Battery. A number of studies of BrainHQ exercises have shown it improves cognition sufficiently to drive significant gains on MATRICS Battery [3,4,5,6,7,16,18]. A BrainHQ exercise regimen is now in an NIMH-funded pivotal trial for submission to the FDA. These gains are not just in the task trained, but generalize to standard measures of cognition, including significant gains in standard measures of attention, memory, speed of processing, executive function, and social cognition, as well as improvements in both auditory and visual-spatial processing. Studies in these areas have typically involved a large amount of training over many months, often with computer games used as an active control. Gains are highly correlated with progress in the exercises. [3] Researchers have found that the gains from training 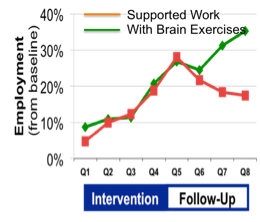 persist for six months after training ends, but do wane over time without further training [7]. Researchers have found that training drives measurable changes in the brain itself. Many such changes were observable through imaging, including increased activity in the amygdala [11,14] putamen and prefrontal cortex (associated with improved emotion perception and social cognition) [11], as well as increased time-locked gamma band response and non-time-locked alpha band desynchronization (associated with improved verbal memory) [9] and increased mPFC activity (associated with improved social functioning) [10]. In a 72-person randomized controlled trial (with a third arm matched set of healthy controls), researchers also found significant gains in Brain Derived Neurotrophic Factor (a growth factor associated with neural health and typically at low levels in people with schizophrenia) among patients who did BrainHQ exercises, as compared to the computer game control. [6] Perhaps, most importantly, researchers have found that training generalizes to increased ability to hold a job [1,2,19], and that ability continues for at least 2 years after training ends, though the effects wane without further training [15].

Depressive Symptoms and Mood.. In a study of 1,606 older adults with no depression at baseline, 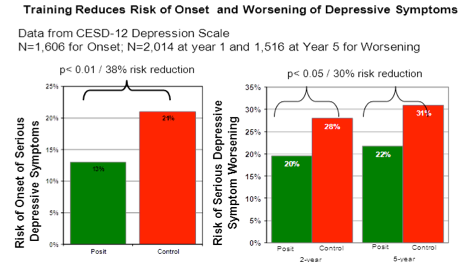 researchers found that those who trained with a BrainHQ exercise (for just 10 hours) were 38% less likely a year later to experience onset of clinically significant depressive symptoms, as compared to the control group. [20] Similarly, looking at 1,516 subjects over a five-year period, they found those who did the exercises were 30% less likely to have a clinically significant worsening of depressive symptoms on the subsequent test date (at years 2 and 5). [21] In addition, using the locus of control measure, in a study of 1,534 older adults, researchers found that those who did BrainHQ training had much greater feelings of control over their lives and more confidence in their everyday activities, than those in the control group [22].

Bi-polar. A recent first small single-arm pilot among veterans with bi-polar, published as a poster, found participants improved at the exercises and on standard measures of attention and memory [P1].

Brain Injury
Traumatic Brain Injury (TBI). A BrainHQ assessment, UFOV®, has been shown effective in number of studies for assessing the safe-driving ability of people with TBI [23,24,25], and BrainHQ exercises have repeatedly been shown to improve performance at that assessment. In a single-arm feasibility study, researchers at Mt Sinai Hospital found that training people with mild to severe TBI to use BrainHQ exercises from home was feasible. They also found gains on the standard cognitive measures used by the military, including ANAM-4, CFQ and FrSBe, indicating improvements in attention, memory, speed and executive function, as well as improvement in self-reported failures in perception, memory, and motor control and in executive dysfunction, apathy and disinhibition. [26] The Mt Sinai team had previously run a similar study, but with training conducted in an in-patient setting, which was published as a poster and had similar results [P2]. In a small 2014 randomized controlled trial published as a poster, researchers found people with traumatic brain injury who used the BrainHQ auditory training had significant improvement on measures of auditory and visual processing speed (d = .89 and .56, respectively), set-shifting (d = .76), following verbal directions (d = .47), and non-verbal reasoning correct responses and reaction time (d = .44 and .50, respectively). [P3]

Neurodegenerative Disorders
Pre-Dementia (MCI). In a small fMRI imaging trial of people with Mild Cognitive Impairment, or MCI, (a 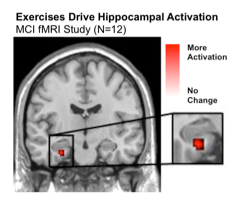 pre-dementia condition with significant memory impairment), those who trained with auditory exercises improved significantly in verbal memory and showed significant increases in left hippocampal activation relative to the computer game control group. [39] In a related pilot, people with MCI who trained with BrainHQ exercises showed evidence for improvements in immediate and delayed measures of verbal memory. With no further training, effects waned, but between group differences persisted for a year. [40]

Parkinson. Patients with mild to moderate Parkinson Disease who used the BrainHQ remediation experienced significantly greater improvements on UFOV performance than the no contact control group. [41] UFOV performance has been correlated to driving performance and other measures related to aging. [41] In a driving study of 19 people with Parkinson Disease, compared to 104 healthy controls, researchers found that, when compared to neuropsychological tests of vision and cognition, the BrainHQ test showed the strongest correlations (r > .75) with measures of failing a standard road test and with number of driving errors. [42]

How It Works
These results indicate that there is something special about the BrainHQ exercises. There are more than 100 issued patents with more than 1,000 patent claims underlying the technology in these exercises. Cognitive scientists from around the world have brought their best ideas to this work and look to make each part of every exercise as powerful as possible, so explaining how they work in a comprehensive manner is daunting.

Simply put, however, the exercises are based on a handful of powerful ideas. Unlike previous cognitive training, they do not try to fix a problem by practicing it – eg, they don’t improve memory by practicing memory. Instead, the exercises start with elemental cognitive function by first improving the speed and accuracy of your sensory perceptions. This becomes the foundation for improved attention. Improved attention is the building block of working memory, and working memory is the building block of pretty much everything else – immediate memory, delayed memory, episodic memory, executive function, reasoning, speech and language, visual-spatial skills, etc. No one has taken this complete bottom up approach to cognitive training before.

In addition, our scientists are experts in brain plasticity, the ability of the brain to re-wire and change. Each exercise draws on what experts have learned in recent years about driving change in the brain. Training needs to be focused on improving speed to meet varying real world conditions; it needs to intensively and progressively improve accuracy; it needs to be adapting continuously and minutely (eg by thousandths of a second) to each person’s performance and ability (based on algorithms that review all prior exercises results); it needs to be designed so the task gradually generalizes to real world experience; it needs to be engaging in a manner that naturally stimulates neurotransmitters (chemicals in the brain that enhance attention, learning and mood) and that brings you back to do the exercises again and again.

What’s Next?
BrainHQ maintains an active research and development effort, with new exercises, assessments and studies. Currently, there are more than 100 published journal articles on the benefits of these exercises and assessments, with dozens of other studies underway or completed and on their way to publication. You can stay up to speed by signing up for our newsletter.