Your Performance Compared To Others

How do you rank in BrainHQ?

Demographic information such as age, gender, and education level has been reported by about 10,000 BrainHQ participants of varying backgrounds and ages. Feedback regarding an individual’s performance can now be compared against others in a similar demographic by using this information.

We understand that as we grow older our abilities to see, hear, remember, encode, address, and make decisions regarding various stimuli in our surroundings will diminish. Performance within the various training tasks available through BrainHQ quite unsurprisingly revealed these changes. Average performance was observed to decline across the age ranges we measured (from approximately age 20 to age 100) in each of the 723 levels of our BrainHQ exercises.

Participant’s best threshold values on one particular level of our Eye for Detail exercises for brain displayed in the figure below demonstrate a typical pattern. On average, despite a wide variability in performance at various ages, you can see (roughly illustrated by the green line) that there is a slow but consistent decline as we grow older. 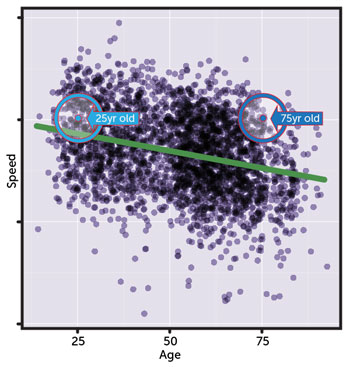 Even though users were also asked to share demographic information such as gender and educational background, with a few exceptions, we did not observe any differences related to these variables.

What does my BrainHQ score tell me?

From the display above you can see that there is a fair amount of variability in performance on the task - even within a given age range. Your percentile score within a certain group roughly corresponds to the proportion of people in that group that you are performing better than or equal to. The slightly above average score of a 25 year-old (illustrated by the green line) as compared to other 25 year-olds is represented by the blue dot on the left. That person’s score is ranked around the 60th percentile. The blue dot on the right represents the same score for a 75-year-old that ranks closer to the 80th percentile for 75-year-olds’ group.

In order to calculate the number that is presented in the middle of your personalized display, we average your percentile scores from each of the BrainHQ levels for which you’ve beaten your original baseline at least once and for which you’ve completed enough training to make a good measurement.

Colours in the individual suites (centre ring), exercises for brain (middle ring), and levels (outer ring) show you the levels you have completed and your corresponding performance with them. The two pictures shared below, for example, illustrate a beginner BrainHQ user (on the left) and an experienced BrainHQ user (on the right).

You should note a few things: 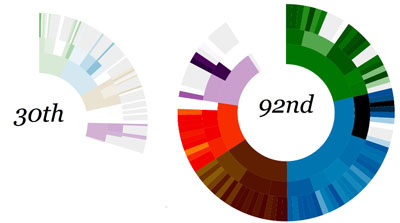 How can you improve your overall standing?

Although performance decreases with age (as is illustrated by the top image) you should notice that there is a fairly wide level of variability within each age group. In the same way that age is not the only contributing factor to perception or memory in our real lives, age is also not the only factor that contributes to performance in our exercises.

Practice is the primary factor that influences performance and the good news is that practice is completely under your control! The greatest predictor of the threshold reached by a BrainHQ user, demonstrated across both exercises and age, tends to be the time that is spent training. This is true not only at the beginning of training where threshold scores are sometimes limited by the number of trials in a level, but even after dozens of sessions in an exercise.

One way to increase your scores is to find the three sets with the lowest scores which will most likely be the ones where you have earned the fewest number of stars, and do additional training in these levels. Determine if your overall score (including focus and memory) can be increased by repeating these particular levels a few times over.