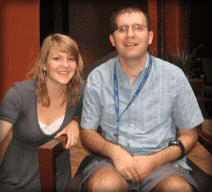 Steven Schulz was four months into his second tour of duty in Iraq when it happened: he was caught in the blast of an Improvised Explosion Devices or roadside bomb and his life has not been the same since. Like thousands upon thousands of Iraq War veterans who suffer traumatic brain injuries during combat, Steven survived the explosion but couldn’t see, speak or laugh the way he used to.

But since he began using Posit Science’s Brain Fitness Program, Steven has regained much of his focus, his conversation skills, and most importantly, his spirits.

“Steven has always had a quick-witted sense of humor and that was pretty much gone after his injury,” said his mother, Debbie. “But when his sister came to visit she said something, and he just came up with the most perfect, witty response, and he said it right away, just perfectly. She even said to him, ‘Wow, Steven, you’re very clever today.’”

When Debbie first heard about the program, Steven’s attention span was so low that she worried about whether he could complete one 15-minute session. However, he quickly progressed to doing two 15-minute sessions at a time and can now complete a full hour of training, something Debbie would have thought to be impossible before he started.

“It was just so valuable that Steven was attending to his brain injury,” she said. “Pushing his attention span past that three minute threshold was just so important, and I think the Brain Fitness Program really helped with that a lot.”

Thanks to the improvement in his brain’s processing speed, said Debbie, Steven can now focus longer and have conversations more easily.

“Say, in conversation, he’s able to respond almost immediately instead of 30 to 40 seconds later. That has definitely improved,” she said.

Following visual cues was also a challenge for Steven following his injury, which left him blind in one eye and with Hemianopsia in the other, which is a condition that cuts the field of vision in half. But Debbie was reminded of how much he has improved when she took him to see the movie Percy and the Olympians.

“Not only could he follow along with what was going on in the plot but he knew all the characters names, so that was very nice,” she said. “Movies in general are usually pretty tough for him.”