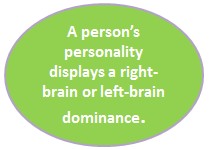 The Fact is: The two sides of your brain depend on each other.
The myth that right-brain individuals are more creative or artsy and left-brain individuals are more logical and linear originated from legitimate science. While this was previously a scientific believe, new imaging technology has led to a discovery that the two sides of the brain are actually more interdependent than previously assumed.