Back to previous page

How Memories Take Shape in Your Brain

It has been said that memories are the diary of our lives and yet as Albert Einstein observed, their nature “… is deceptive because it is coloured by today’s events.” Capturing their true essence in words invariably generates much discussion, but focusing in on their physical role Samuel Johnson noted that “the two offices of the memory are collection and distribution.”

Following this more pragmatic analogy, let us examine where and how the brain collects and distributes incoming sensorial stimuli among its intricate network of some 100 billion interconnected neurons.

As we know, the human brain is fundamentally plastic and there are changes that take place physically, functionally, and chemically, as we acquire and develop any ability or memory skill. In the words of Dr. Merzenich, “actually what the brain is doing is changing its local wiring, changing the details of how the machinery controlling your behaviour is connected.” In effect, it is changing the distribution of synaptic connections.

Memories that last mere milliseconds are known as ‘immediate memories’ and are made up of sensory input received in specialized areas of the cortex from which it is transferred and kept available in working memory for typically 10 to 15 seconds.

Memories are made up of what we sense, primarily what we see and hear. The first step involves perception and processing of information, sensation and voluntary muscle movement, which is performed by the cerebral cortex. National Geography - interactive memory map

Memory formation and neuroplasticity in action – thanks to the dedicated efforts of researchers at the University of Southern California , led by Don Arnold and Richard Roberts, microscopic probes were engineered that light up synapses in a living neuron, in real time, by attaching fluorescent markers onto synaptic proteins. As a result, scientists are able to see live excitatory and inhibitory synapses for the first time, and how they change as new memories are formed.

The synapses are recognizable as bright spots along the dendrites. These are the branches of a neuron 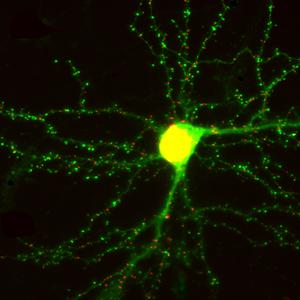 that transmit electrochemical signals. With the brain’s processing of new information, those bright spots change, and in doing so visually indicate how synaptic structures in the brain have been altered by the new data. This experiment sheds new light on the organic processes that continually shape and form the amazing plasticity of our brains.

Please join us next week as we focus our attention on the challenges of memory and stress.

In the meantime, learn about our patented design behind our memory exercises and feel free to light up your inner genius with some brain exercises.